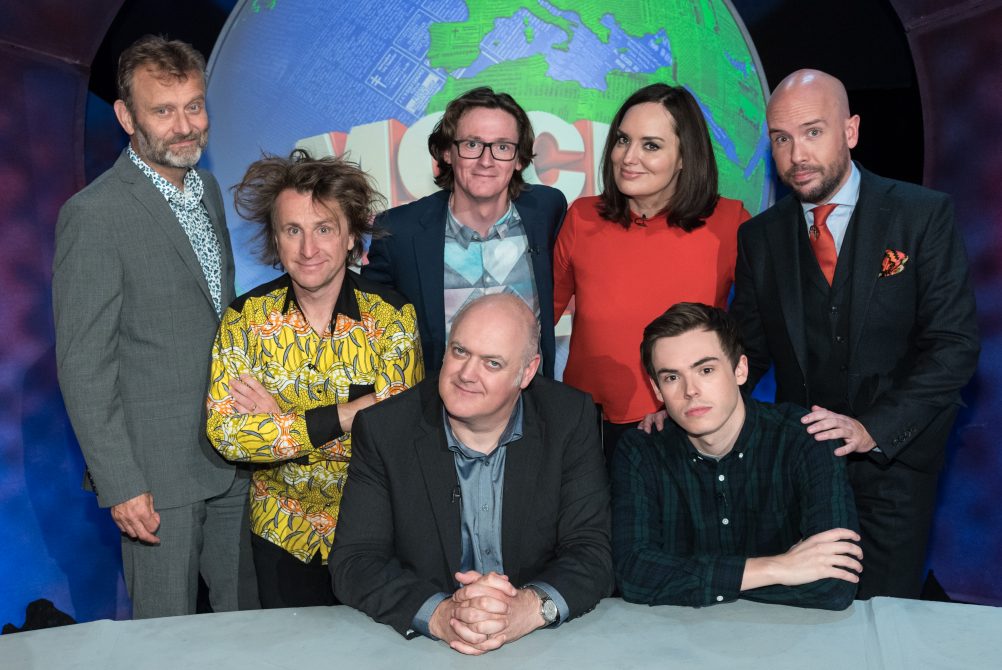 Mock the Week returns to BBC Two from its summer recess this autumn and, as well as finding new ways to tackle Brexit, Trump and England not winning the World Cup, the producers are anxious to celebrate the show’s latest landmark: when Australian comedian Deborah Frances-White debuts on September 14th, she will become the programme’s 100th panellist, the latest in an A to Z (or more accurately Acaster to Yashere) that reads like a veritable Who’s Who of comic genius from the past thirteen years.

“When you look at the incredible list of talent Mock the Week has brought through over the last seventeen series, you remember the remarkable journeys these performers have been on” said a show insider I saw being ejected from The Ivy earlier “They arrive as nervous young stand ups, keen to make the most of a prime time TV opportunity and grow into global superstars selling out stadia. We wanted to organise a big 100th performer reunion party but unfortunately most of them have blocked us on twitter and their phones just seem to ring out.”

“It’s so humbling to have reached the 100 panellist milestone,” our source said when he eventually managed to catch up with me despite my best efforts. “The numbers are really incredible, if those 100 people all joined hands they could stretch around the globe 25 times – although when I say that, I’m referring to the globe logo in the Mock the Week studio, which isn’t really all that big.”

As a special addition to this commemorative press release, we wondered if the production team could list 100 Amazing Performer Facts to celebrate the achievement and it turns out they couldn’t, but they did manage 25 moderately interesting ones (see attached sheet).

Mock the Week was created by Dan Patterson and Mark Leveson, the creative force behind the iconic improv-based show Whose Line Is It Anyway? which ran for ten years on British TV before successfully transferring to the United States. Ruby Kuraishe is the Executive Editor for the BBC. It is produced for the BBC by independent production company Angst Productions. The second half of series 17 runs for six weeks through September and October 2018.

1) Deborah Frances White will be Mock the Week’s 100th panellist in the 183rd episode (including compilations).

3) Host Dara O Briain and Hugh Dennis are the only performers who have appeared in every single episode (though Hugh was not in the pilot).

5) Of the non-permanent regulars, Ed Byrne has made the most guest appearances with 52 (not including compilations and specials) followed by Milton Jones on 41.

6) Ed has made at least one appearance in every series since series three in 2006.

7) 84 different performers have faced the stand up wheel. It has revolved 460 times, selecting 205 topics with Andy Parsons stepping up on a record 64 of those occasions.

8) Rory Bremner was the first performer to volunteer in the first show: he tackled ‘The Tory Leadership Contest’.

9) There have been 51 different topical films used over the years in ‘Newsreel’, with the Queen appearing most often (16) and her husband the Duke of Edinburgh and former Prime Minister David Cameron close behind on 14.

10) Jon Culshaw, Jan Ravens and Rory Bremner are the only other performers to have featured in the ‘Newsreel’ (occasionally called ‘Royal Commentary’) round besides Hugh Dennis.

11) The oldest performer to make a debut on the show was Clive Anderson who was 53.

12) The youngest person to appear on the show was Jack Whitehall who was 21. 13) To date 51 of the performers have been in their 30s at the time of their debut,

14) The tallest performer to appear on the show is, unsurprisingly, the 6ft 8ins Greg Davies.

16) The shortest guest ever to appear on the series is 4ft 10ins Susan Calman who just edges out the 4’11” duo of Sandi Toksvig and Lucy Porter.

17) There have been 69 English-born panellists on the show, six each from Scotland and Wales, three each from Canada Australia and the USA, two apiece from South Africa and Ireland and one each from Denmark, Iran, New Zealand, Japan, Northern Ireland and Iceland.

18) The most popular first name of a performer is John: there have been three (Bishop, Oliver and Robins) plus Jon Culshaw as a bonus fourth.

20) 19 performers have appeared on the show wearing glasses, 11 have sported a tie and one each with a hat (Tez Ilyas) and a scarf (Andrew Maxwell).

21) Gary Delaney and Sarah Millican are the only husband and wife to have both appeared on the show, although John Robins & Sara Pascoe appeared-together- as a couple. Rob Beckett and Tom Allen were at school together and Nish Kumar and Ed Gamble were friends at university.

23) Panellists Alun Cochrane, Micky Flanagan and Ben Norris were all former studio warm up men for the show.

24) Rory Bremner, Susan Calman and Jan Ravens are (so far) the only performers to have appeared on both Mock the Week and Strictly Come Dancing

25) 32 Mock the Week performers were born in London; Glasgow and Bristol are next best with three each.