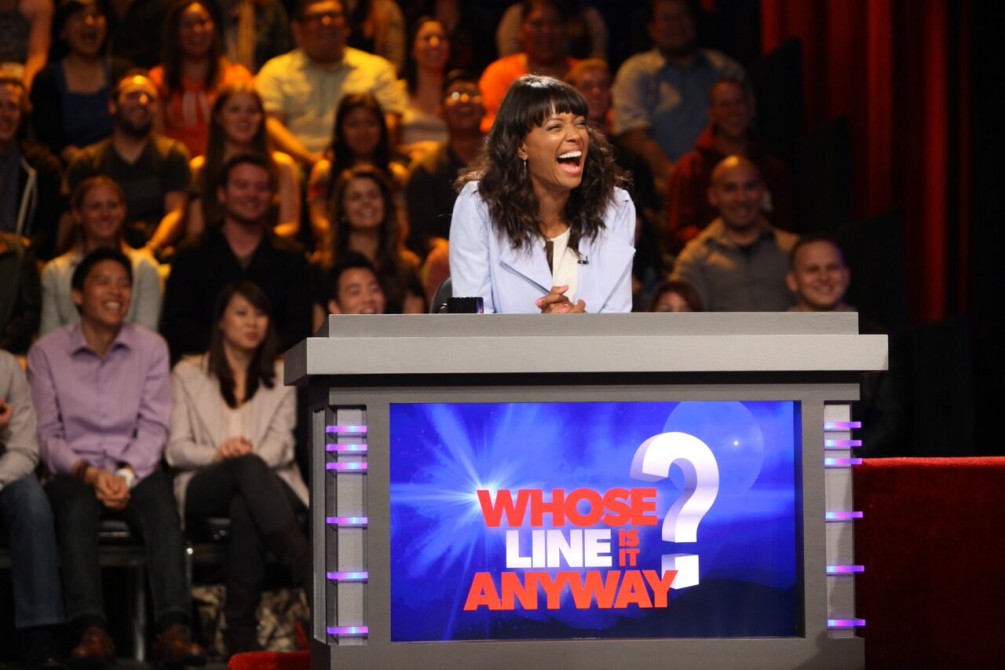 Whose Line Is It Anyway?’s continued success

The legendary comedy improv show Whose Line Is It Anyway?  has been picked up for a second series of 24 episodes by the CW network in America. The half hour comedy show, made by British independent TV company Angst Productions, will air in 2015. CW President Mark Pedowitz announced the news following a highly successful first series which had already had its run extended from 24 to 36 episodes. Whose Line?  has record-breaking viewing figures and is so successful it is shown on Monday and Friday nights. Originally pioneered on BBC radio and broadcast on Channel 4 TV, Whose Line Is It Anyway? was a big hit on ABC from 1998-2004 and ABC Family from 2005-2007, both runs hosted by Drew Carey. This current version features the popular regulars from the ABC years, Ryan Stiles, Colin Mochrie and Wayne Brady, but is now hosted by standup, actor, broadcaster and podcaster Aisha Tyler, probably best known in the UK for her recurring role as Ross’ girlfriend Charlie in Friends.

For the uninitiated, the premise of Whose Line Is It Anyway?  is simple: responding to random ideas generated by the host and studio audience, the performers embark on an array of cleverly constructed games utilising their own wild imaginations and the minimal information provided to depict characters, scenarios and musical masterpieces.

One way that the show has developed since its Channel 4 days is the appearance of guest stars who join the Whose Line regulars for a game or two. In the first CW series, guests included Lauren Cohan (The Walking Dead), Michael Weatherly (NCIS), NFL superstar Rob Gronkowski, Olympic Gold Medallist and commentator Tara Lipinski and Kevin McHale (Glee).

The CW Network is America’s fifth network after ABC, CBS, Fox and NBC and has, until now, been dominated by teen dramas such as The Vampire Diaries  and Arrow. Mark Pedowitz, CW Network Head, took a punt on bringing back Whose Line Is It Anyway?  to broaden the channel’s viewing demographic and to introduce comedy back to the channel.

Angst Productions is the independent production company which makes the hit comedy panel show Mock The Week, which has just ended another very successful run on BBC Two, breaking for the summer before returning for 6 weeks from 11th  September. The company is run by Dan Patterson who created Whose Line Is It Anyway? and Mock The Week  with his creative partner Mark Leveson. Patterson, says: “We’re thrilled the show is going so well and it highlights the enduring appeal of improv.”

Whose Line Is It Anyway? is an Angst/Hat Trick production for The CW. Hat Trick International is distributing the show outside of North America.